Dolby Atmos will revolutionize the way you enjoy music

SAN FRANCISCO, September 25, 2019 – Dolby Laboratories, Inc. (NYSE: DLB), the leader in immersive audio and video entertainment, is introducing a more emotional way to experience the music you love with Dolby Atmos, now supported on Echo Studio and Amazon Music HD. Dolby Atmos is redefining how music is experienced by giving artists a platform that removes the limitations of creation and allows listeners to experience a deeper connection with their favorite artists and songs. Listening to music in Dolby Atmos on Echo Studio will unleash every detail as it was meant to be heard, completely immersing fans in a whole new way. 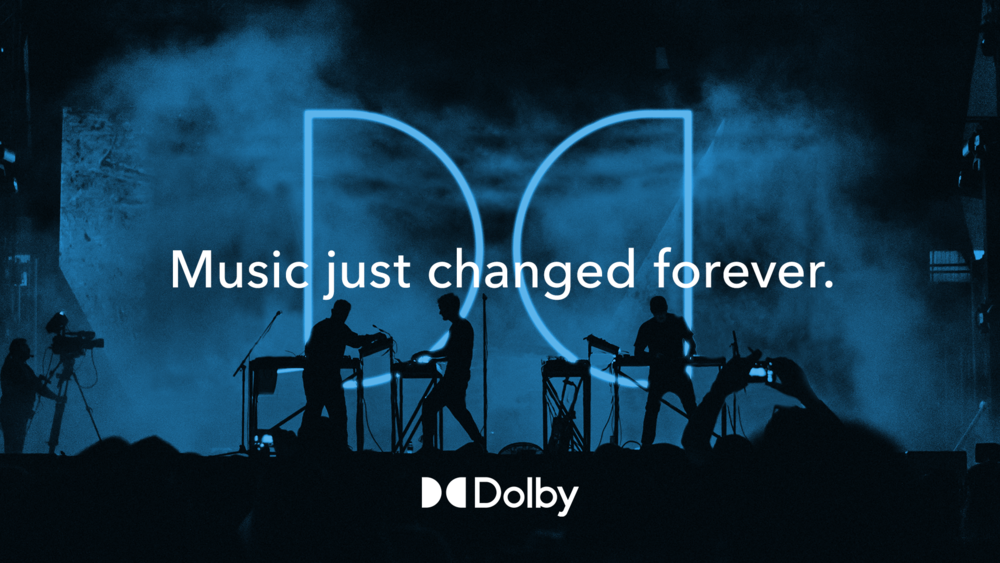 “Dolby Atmos music is a new experience for artists and fans. It opens a new creative palette for musicians to experiment and express themselves with their recordings,” said Todd Pendleton, Senior Vice President and Chief Marketing Officer, Dolby Laboratories. “With Dolby Atmos, now available on Echo Studio and Amazon Music HD, fans will feel like they are inside the music, moving them in new ways, and allowing them to fall in love with music all over again.”

Since its founding by Ray Dolby, acclaimed audiophile and music lover, Dolby’s guiding principles have been to empower creativity, self-expression, and a shared belief that people are moved and compelled by immersive experiences. Dolby first accomplished this with the creation of noise reduction and advancements in multi-track recording, which fundamentally changed the music industry. Today, Dolby is building upon this legacy by reinventing how music is created and experienced.

Following the debut of her new single and music video “Show Me Love,” performed live with a visual sonic installation at Dolby SoHo, Alicia Keys, 15-time Grammy® Award-winning singer, songwriter, and producer says, “Dolby Atmos is a new creative medium and art form that allows me to completely immerse my fans and transport them inside my music. When I first heard it, I was STUNNED! I’ve never heard music sound like that before! This is the ideal way to listen to music. It’s like hearing my music for the first time.” 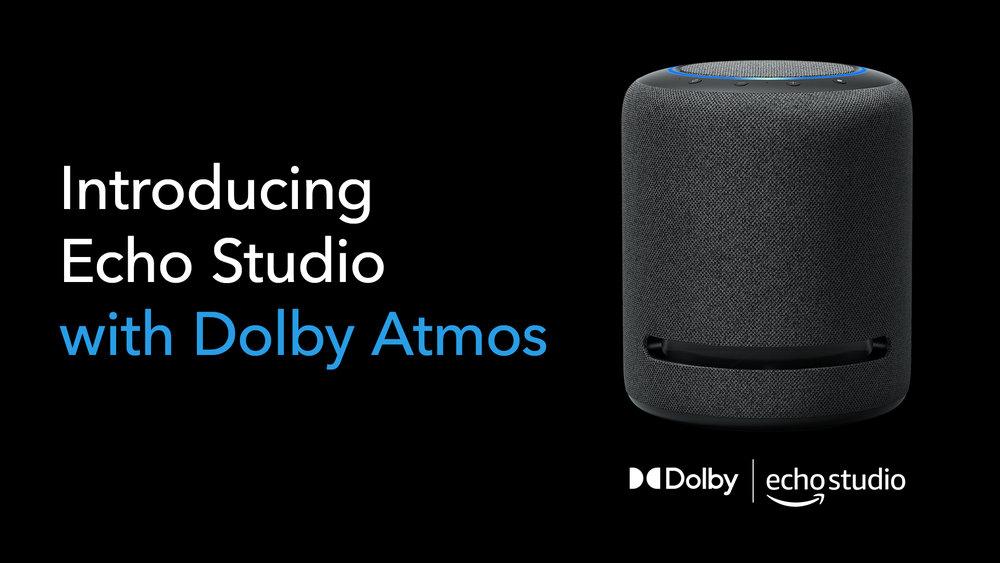 A defining characteristic of Echo Studio is its ability to fill a room with powerful immersive audio through a compact form factor, an experience unheard of from a smart speaker. Dolby worked with Amazon to create this music listening experience, which pushes past the boundaries of the mono and stereo solutions found in most smart speakers today.

“We are excited to announce the all-new Echo Studio. We worked throughout its development with Dolby to bring our customers an unparalleled listening experience from a single, easy-to-use speaker,” said Miriam Daniel, Vice President of Echo and Alexa Devices, Amazon. “Echo Studio is the first smart speaker to deliver a truly immersive audio experience with Dolby Atmos. It allows you to hear objects placed into the three-dimensional space around you—it’s music the way the artist intended you to hear it and we can’t wait for our customers to try it.”

What is Dolby Atmos music?

Imagine if there were a way to connect with music at its fullest capacity and creative potential – not the way most people hear music today, but a version that pulls you into a song to reveal what was lost with traditional recordings. Dolby Atmos does just that. Dolby Atmos allows you to discover hidden details and subtleties with unparalleled clarity. Whether it’s a complex harmony of instruments placed around a listener, the unleashing of a legendary guitar solo, a massive bass drop that washes over you, or the subtle breath a singer takes, Dolby Atmos gives music more space and the freedom to unleash every detail and emotion as the artist intended. 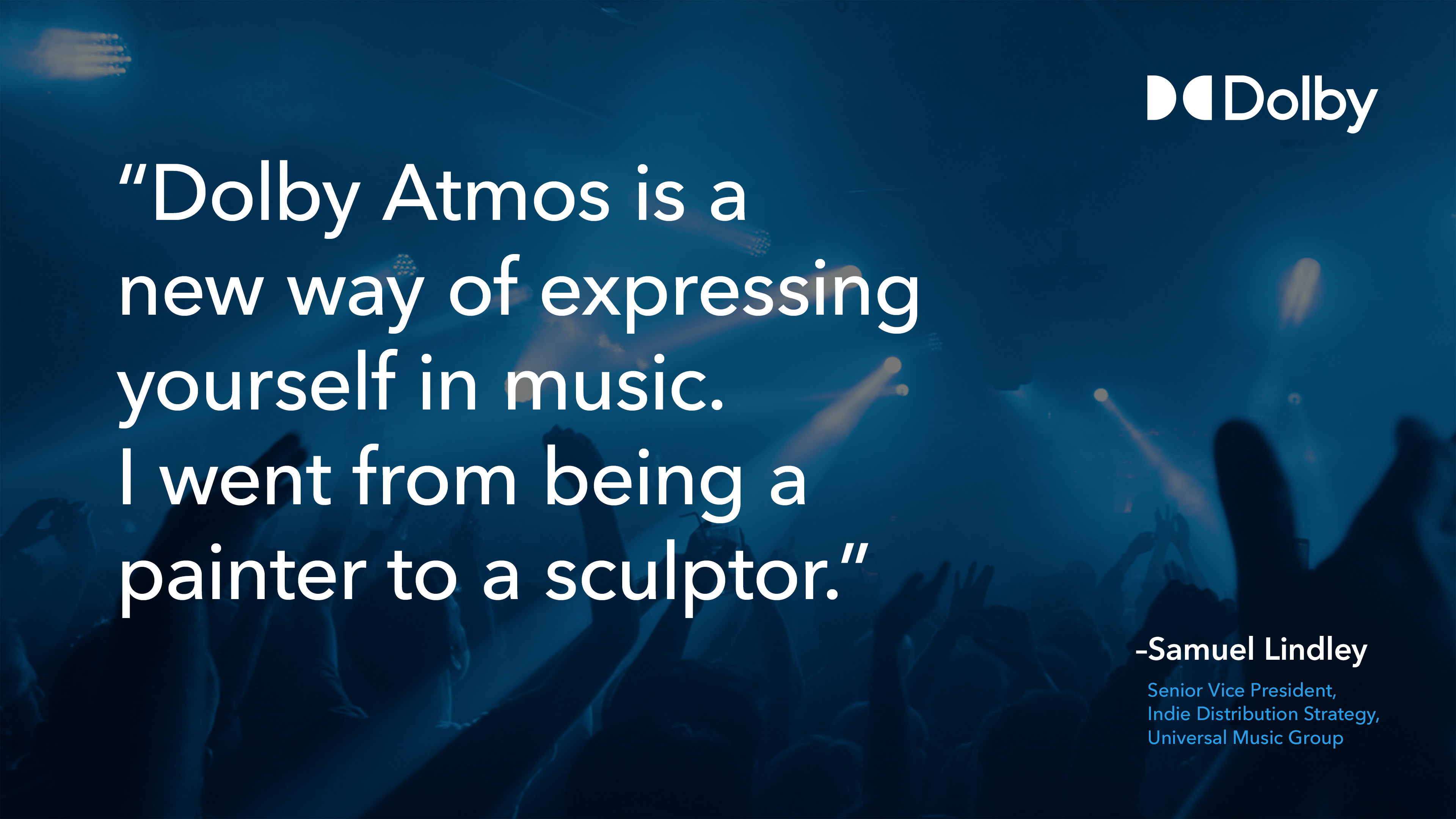 What music is available in Dolby Atmos?

Dolby is working closely with artists, mixers, producers, and record labels to expand the catalog of music available in Dolby Atmos. This includes Universal Music Group (UMG), the world leader in music-based entertainment, which has announced plans to release thousands of new songs, current hits, and legendary tracks in Dolby Atmos from some of the world’s biggest artists such as Bastille, The Beatles, Elton John, Lady Gaga, Luciano Pavarotti, Marvin Gaye, and The Weeknd. This will cover multiple labels across UMG and feature a wide range of genres including hip-hop, pop, rock, country, jazz, and classical music. 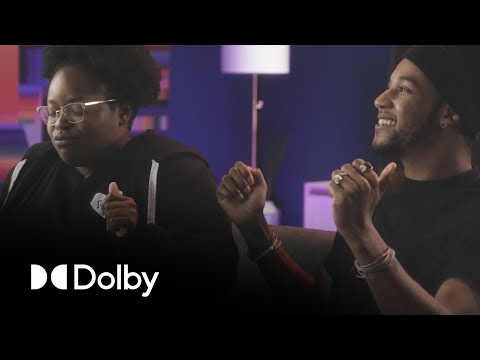 Dolby Laboratories (NYSE: DLB) is based in San Francisco with offices in over 20  countries around the globe. Dolby transforms the science of sight and sound into spectacular experiences. Through innovative research and engineering, we create breakthrough experiences for billions of people worldwide through a collaborative ecosystem spanning artists, businesses, and consumers. The experiences people have – with Dolby Cinema, Dolby Vision, Dolby Atmos, Dolby Audio, and Dolby Voice– revolutionize entertainment and communications at the cinema, on the go, in the home, and at work.

Dolby, Dolby Atmos, Dolby Audio, Dolby Cinema, Dolby Vision, Dolby Voice, and the double-D symbol are among the registered and unregistered trademarks of Dolby Laboratories, Inc. in the United States and/or other countries. Other trademarks remain the property of their respective owners.