The campaign is based on the insight that people want to feel a deeper connection with their favorite artists through music [1], the kind a Dolby Atmos Music experience can authentically deliver.

“We continue our Dolby Atmos Music journey with J Balvin exploring how colors and culture define his iconic musical style,” said Todd Pendleton, Senior Vice President and Chief Marketing Officer, Dolby Laboratories. “We share J’s mission to bring his music to the world for everyone to feel.”

The :90 second film goes deep into J Balvin’s creative process and his first experience with Dolby Atmos Music. Spotlighting his recently released single Blanco, J Balvin discusses his perspective of music as a color palette, the impact of growing up in Colombia and moving to New York to chase his dreams, and how these influences define his distinct sound. This exclusive portrait film from Dolby presents his inner monologue of transcending barriers through music, pulling the audience closer in so they can feel the colors as he does. 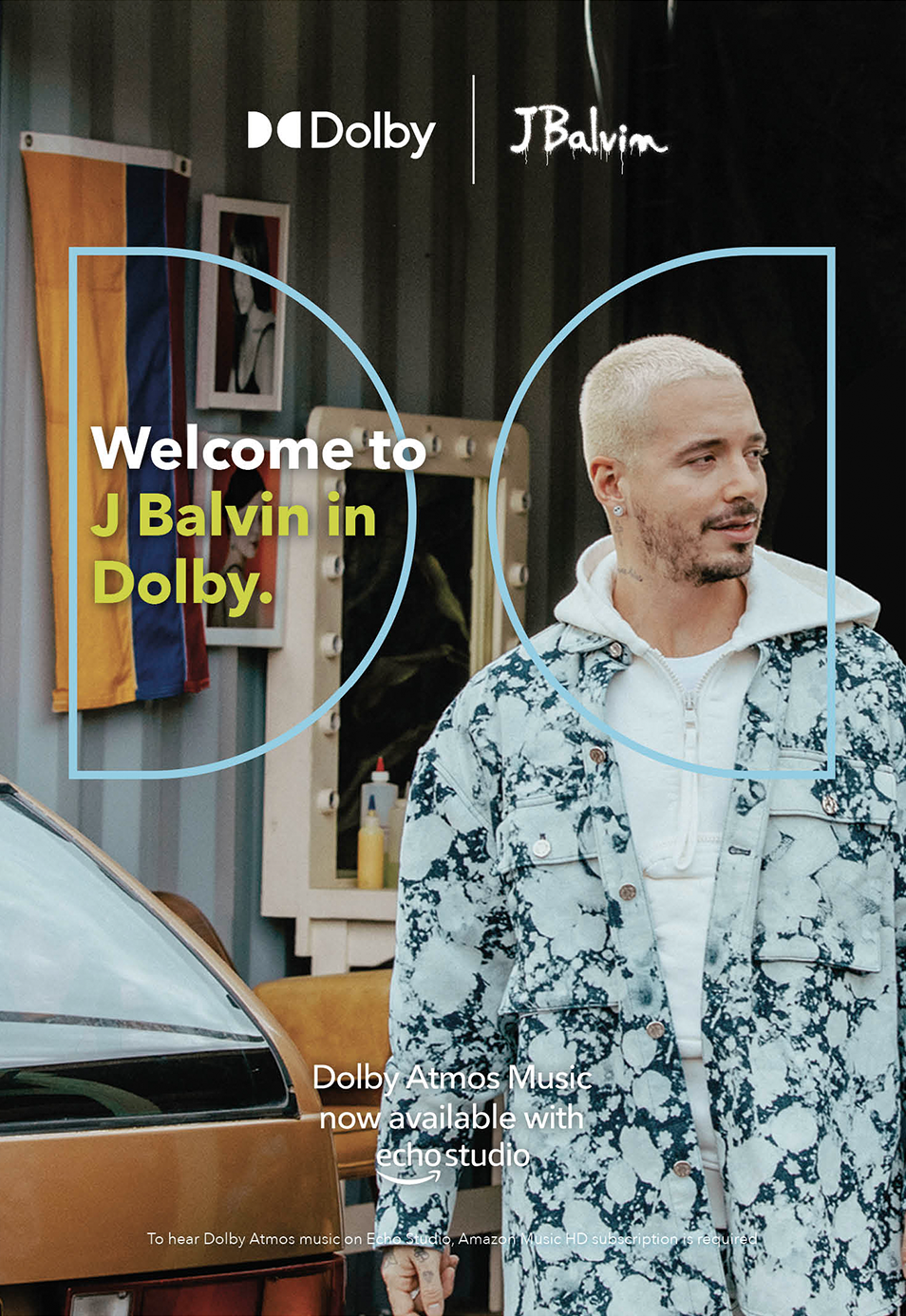 The piece follows Sunday’s debut of a two-minute film featuring Lizzo, which explored the emotion behind music and the beauty of a Dolby Atmos experience.

In the weeks to come, Dolby will give people an intimate look into the creative minds of other top artists through a series that showcases their personal ethos, stories, and close relationship with fans. Dolby joined forces with these trailblazers in music because they inspire others by living unapologetically, and their art is leading culture. The campaign features real stories from each artist and highlights their latest singles.

The films were directed by the award-winning Toronto based director Karena Evans at m ss ng p eces. She is one of entertainment’s most sought-after talents and is known for her cinematic, authentic, and narrative-focused directorial style. Karena is behind Drake’s 2018 music video God’s Plan, and is revered for telling diverse, inclusive stories about the human condition.

“The genesis of this campaign is inspired by Dolby’s mission itself – a pure transmission of artist intention,” said Karena Evans. “We decided to approach this campaign unconventionally through interior monologues to explore the purity of thought and creativity. At its core, this is what Dolby Atmos is.”

What is Dolby Atmos Music

Imagine if there were a way to connect with music at its fullest capacity and creative potential – not the way most people hear music today, but a version that pulls you into a song to reveal what was lost with traditional recordings. Dolby Atmos does just that. Whether it’s a complex harmony of instruments placed around a listener, the unleashing of a legendary guitar solo, a massive bass drop that washes over you, or the subtle breath a singer takes, Dolby Atmos gives music more space and the freedom to unleash every detail and emotion as the artist intended.

How to experience Dolby Atmos Music

Dolby is working closely with artists, record labels, streaming services, and consumer electronics manufacturers to make Dolby Atmos Music experiences widely accessible. Two of the world’s largest record labels – Universal Music Group and Warner Music Group – have announced plans to release tracks in Dolby Atmos from some of the biggest names in music. You can enjoy music in Dolby Atmos via Amazon Music HD on Echo Studio, at your local Dolby Cinema or in your home through movies released in Dolby Atmos, on special released albums available on Blu-ray, or at a number of night clubs around the world where electronic musicians are performing live in Dolby Atmos. To learn more, visit music.dolby.com.

Dolby Laboratories (NYSE: DLB) is based in San Francisco with offices in over 20  countries around the globe. Dolby transforms the science of sight and sound into spectacular experiences. Through innovative research and engineering, we create breakthrough experiences for billions of people worldwide through a collaborative ecosystem spanning artists, businesses, and consumers. The experiences people have – with Dolby Cinema, Dolby Vision, Dolby Atmos, Dolby Audio, Dolby Dimension, and Dolby Voice – revolutionize entertainment and communications at the cinema, on the go, in the home, and at work.

“Reggaeton’s Global Ambassador” - J Balvin is now one of the top streaming music artists in the world, regardless of language, and has developed a legion of fans represented by over 65 Million social media followers. Balvin is leading a second generation of Musica Urbana stars that have propelled Latin music to an unprecedented global embrace. Simultaneously, Balvin has become Latin music’s strongest cultural envoy to both the fashion and pop art communities, while becoming one of the music industry’s most in-demand collaborators, and worldwide major festival performers. This year has already seen J Balvin perform in the opening segment of The GRAMMY Awards, named the Premios Lo Nuestro “Artist of the Year” for an unprecedented third consecutive time, collect his 18th #1 Single, fourth Latin Grammy Award, and hold the #1 position on YouTube Music’s Global Artist chart for an astounding 14 consecutive weeks – while consistently generating over a Billion views a month on the platform. Over the summer, J Balvin and Bad Bunny dropped Latin music’s biggest surprise and critically praised album of the year, with the release of their collaborative album “Oasis”– ­which notched eight weeks as the #1 Latin Album in the country, and just received J’s second GRAMMY nomination. Throughout the year, J Balvin also connected with millions of fans live by taking his visually stunning “ARCOIRIS (Rainbow) TOUR” across the United States and throughout the world, while further etching his name in Urbano music history as the first Reggaeton artist to perform on the mainstage at Coachella, leading EDM festival Tomorrowland, and as the first-ever Latin artist to Headline at Lollapalooza.

Dolby, Dolby Atmos, Dolby Audio, Dolby Cinema, Dolby Vision, Dolby Dimension, Dolby Voice, and the double-D symbol are among the registered and unregistered trademarks of Dolby Laboratories, Inc. in the United States and/or other countries. Other trademarks remain the property of their respective owners. DLB-G

[1] According to a recent survey, 67% of respondents said it would be appealing or very appealing to have a deeper connection with their favorite artists when listening to music they love. 50% of this group stated they would strongly feel a deeper connection if they could hear more depth, detail, and clarity in the music. Research conducted in November 2019 amongst US general population, ages 16-45.